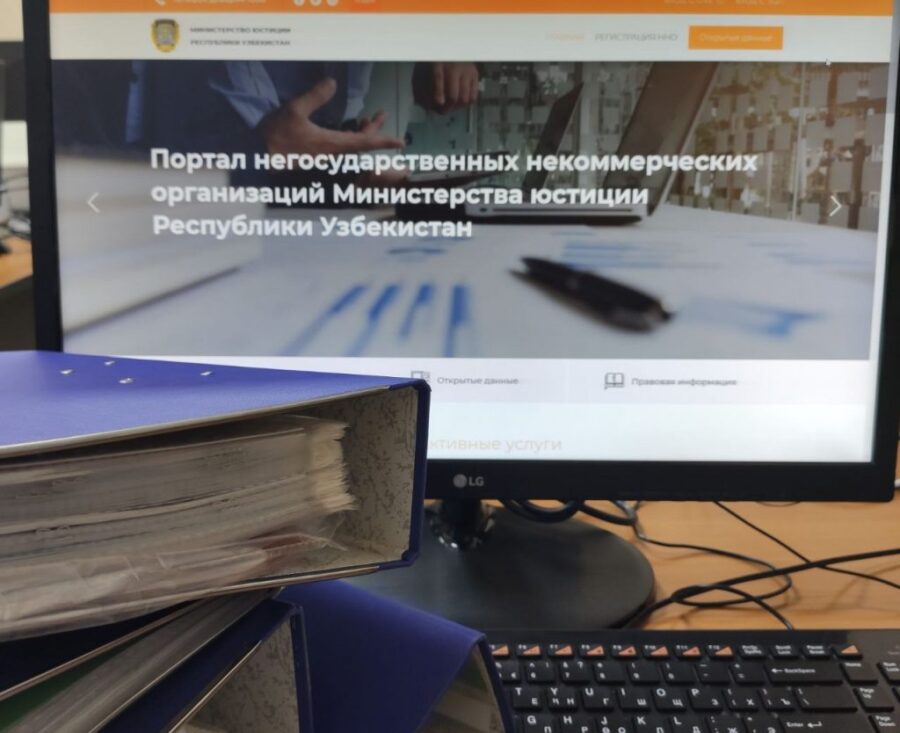 07 Apr Registration of NGOs in the “new Uzbekistan”: many questions remain open!

On 4 March 2021, the Ministry of Justice of the Republic of Uzbekistan, together with the Nationwide Movement “Yuksalish,” organised a seminar on “Procedures for registration of NGOs at all levels”. For about two hours, the Ministry representatives explained the procedures for registration of NGOs, their organisational and legal forms (public association, public fund, institution, etc.), how to register branches and representative offices of INGOs and provided the most common mistakes in this process. Unfortunately, they allocated only about half an hour for the Q&A session, and the MoJ officials left behind many questions from the civil society activists behind. I decided to publish all their questions here and make an analysis of what has really changed in terms of the registration of NGOs in the “new Uzbekistan”:

Former political prisoners and human rights activists like Agzam Turgunov also asked several questions at the seminar regarding the registration of their NGO Restoration of Justice with Dilmurod Saidov. Of course, we should give credit where credit is due when another human rights activist Azam Farmonov registered his NGO Huquqiy Tayanch (Legal Support) – the first registered human-rights NGO in Uzbekistan after 17 years (!). Turgunov asked the following questions:

“Every time when we reject, you should bring [the documents] again as you may have more changes. Therefore, we indicate one error at a time. And every time we study the Charters,” replied the Ministry of Justice official. The Ministry representative said that the procedure for returning the documents is not specified in the law, therefore it seems that they keep all the applicatio documents.

The seminar participants asked the justice authorities to publish all the answers to the following questions and make the samples of NGO Charters and other application documents available at the e-ngo.uz portal. The Ministry of Justice himself promised to make the sample NGO Charters available, but a careful examination of the NGO portal makes it clear that the Minister did not fulfil the promises.

A prominent Uzbek journalist at the Voice of America, Navbahor Imamova, has recently interviewed Mr Avazbek Madaminov, Head of the Department on NGOs at the Ministry of Justice, who said that multiple rejections of independent self-initiative NGOs are not of systematic nature, and each rejection is made based on the existing legislation. Madaminov also recognised the existence of government-organised NGOs (GONGOs) like the Federation of the Trade Unions of Uzbekistan and the Chamber of Commerce and Industry but specified that the rules and procedures are equal for everyone.

However, in practice, we still observe that grassroots initiative groups face barriers and red tape in the registration of NGOs. I personally can’t say that the systematic changes have happened, although there were some cosmetic improvements by reducing the state registration fees, shortening the period for review of application documents, etc.

How can Mr Madaminov explain the reason why the Association of Volunteers of Uzbekistan was registered at the first submisison and the a self-initiative group Youth Volunteer Center “Oltin Qanot” (Golden Wing) already received 21 rejections (!) to register their NGO in Tashkent city?

Today I have contacted San’atbek Muzaffarov, an undergraduate student of social work at the National University of Uzbekistan. He said their initiative group received 21st rejection on March 14, 2021, while the previous rejection was made due to the repetition of some words in the Charter. This time, the Tashkent city department of justice denied the registration of NGO Oltin Qanot because the application form they used was not correct. Could the justice officials indicate this problem at the first or second submission of the application documents?! No, they should keep all the mistakes and provide them one by one so that the initiative groups would become disappointed and finally give up their NGO registration.

If you want to know everything about NGO registration in #Uzbekistan look at the 20th (!) rejection letter @MinjustUzb to the group of young volunteers “Oltin Qanot” who can’t register since November 2018. Registration was denied as some words in the Charter are repeated twice! pic.twitter.com/DxiUTZDYiI

My own hypothesis is that the Association of Volunteers of Uzbekistan is a GONGO and has trustworthy pro-government founders or at least a very professional lawyer? But San’tabek and other young volunteers in his team may not have this opportunity to hire a lawyer and prepare the Charter documents according to the requirements. They are not lawyers themselves! However, the MoJ explicitly indicated last year that the justice officials don’t provide legal support to initiative groups to counteract “the occurrence of a conflict of interest and corruption risks in the judicial authorities.” Even if this is true, why then the NGO Madad, which provides legal consultations to citizens, is not providing such support to Uzbekistan citizens who would like to register NGOs?!

Moreover, if the MoJ is so risk-aware about the possible corruption and conflicts of interest, why the Minister himself individually meets the members of initiative groups during his reception days? Following the previous logic, the Ministry officials should not have any individual contact with the initiative groups, as they can’t provide any consultation or legal support to them? On the contrary, I believe that excessive bureaucracy, lack of transparency and red tape in NGOs’ registration lead to corruptions riks.

During his interview, Mr Madaminov mentioned the Law “On Administrative Procedures,” saying that the Ministry of Justice relies on this very legal act while reviewing NGO registration documents. However, Associate Professor of Tashkent State University of Law, Candidate of Legal Sciences Leonid Khvan made a comprehensive analysis of the MoJ’s official response and several NGO rejection letters. Mr Khvan concluded that MoJ openly violates the provisions of the Law “On Administrative Procedures”. In his recent article, Mr Khvan pointed out that the new Code on NGOs should consider the established rules on administrative procedures, which will then provide a high degree of protection of the rights of founders of independent NGOs.

Importantly, we can say of any systematic changes in NGOs’ registration if the MoJ has postponed the adoption of the Code on NGOs several times already while Uzbek civil society activists criticized the first draft presented by the Ministry in early 2020 as it did not comply with the international standards. The procedures for registration of NGOs are still regulated by the resolution of the Cabinet of Ministers No. 57 dated March 10, 2014, which was adopted during the Karimov era.

The MoJ loves providing the number of NGOs’ positive dynamics, stating that currently, more than 10,000 NGOs are registered in Uzbekistan. But as we know, there are lies, damn lies and statistics! A feminist and women’s rights activist Irina Matvienko analysed the state register of NGOs published by the Ministry of Justice in the Khorezm region and concluded that 10,000 NGOs could be overstated by 10 times! The reason is that local branches of republican GONGOs (e.g. the Youth Union of Uzbekistan, the Federation of Trade Unions, etc.) are registered as separate legal entities and are counted as independent NGOs. For instance, the GONGO Youth Union of Uzbekistan has 14 district branches in the Khorezm region, which are counted as separate NGOs; the GONGO Mahalla Foundation also has 14 such branches.

In the Khorezm region alone, 21 NGOs have a total of 210 branches! If we consider that there are similar GONGOs and their branches at the republican level, it is clear how the total number of NGOs in Uzbekistan is derived. As of 2018, the Independent Institute for Monitoring the Formation of Civil Society (which was transformed into the Centre for Development of Civil Society) provided that about 6 thousand (about 65% of all registered NGOs in Uzbekistan) are government-organised or so-called “systemic NGOs” while only about 3 thousand are “self-initiative NGOs” which were established at the grassroots level by independent civil society activists.